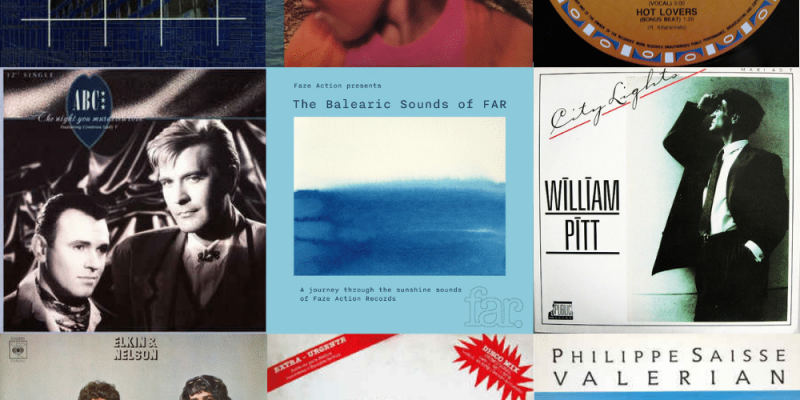 With the UK governments announcement that the Balearic islands are now on their near fabled Green list for holiday destinations it’s seems particularly timely that UK producers Faze Action have pulled together a rather sublime collection The Balearic Sounds Of FAR which landed on digital today via the Faze Action Records Bandcamp.

Featuring tracks and remixes from Faze Action, Rudy’s Midnight Machine, Willie Graff, Max Essa, Zeke Manyika, A Vision of Panorama and Micky Milan it comprises 12 sun soaked gems perfect for those lazy afternoons on the beach and sunset sets. Just add sun and cocktails for that perfect Balearic vibe. The album is full of highlights but the Faze Action edit of Micky Milan 80’s French boogie bomb C’est Une Bombe has verve aplenty. Meanwhile Rudy’s Midnight Machine’s Body Wave is laidback synth bliss and Faze Action & Zeke Manyika’s Mangwana as remixed by Vision Of Panorama sounds like it was made for that speedboat trip to Formentera.

Every track on offer here is divine and they all fit together for an album which is as near to perfect as you can imagine.

It’s out on digital right now via: https://fazeactionrecords.bandcamp.com/album/faze-action-present-the-balearic-sounds-of-far

with the vinyl release following on later in the year: https://juno.co.uk/products/faze-action-presents-the-balearic-sounds-of/835414-01/

To celebrate the release we asked Faze Action to give us 10 perfect tracks that they would have on their own Balearic playlist.

We are huge fans of Elkin & Nelson, like most people we started with the more well known classic “Jibaro” but the energy of this track is infectious and never leaves our box.
There’s some great footage of them doing it live on Spanish television somewhere on Youtube, it’s well worth checking.

Huge genre defining record that manages to create the essence of the Balearic sound.

French Balearic boogie warmth from the 80s made for dancing on a moonlit beach with the sand between your toes.

7. ABC- The Night You Murdered Love (The whole Story Mix)

We first heard this on a Leo Mas mix from Amnesia in 1987, Pure UK pop sound! This mix is slightly geared towards the dance floor including an ace rap from Roxane Shante

Brazilian music naturally conjures up images of sunshine and dancing and this record doesn’t disappoint, it hasn’t left the record box form a long time.

Laid back pool side moments from French pianist Phillip Saisse.

Sorry we had to include one of our own in the top 10 as its a personal fave of ours enjoy.

Grab Faze Action’s The Balearic Sounds of FAR on digital now via: https://fazeactionrecords.bandcamp.com/album/faze-action-present-the-balearic-sounds-of-far