Can you even believe that it’s October already? The year is flying by but the one good thing that we can look forward to this month is that ADE is now only a few weeks away. If you are heading to Amsterdam and want some incredible disco in your life then make sure that you check out the Midnight Riot showcase which is packed to the rafters with talent including UK House legend Michael Gray taking to the decks. 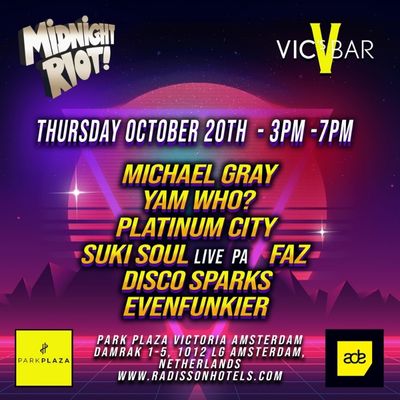 On the release front Midnight Riot have some real treats in store in the run up to ADE too with heat coming from C.Da. Afro, Conan the Selector, Hollie Profit and Edaf which you can check out below, Even Funkier, and this upcoming groover from Disco Sparks with the last two on that list also playing at the Midnight Riot ADE showcase. Get in there.

Now onto the best time of the month as Yam Who? delivers his 9 Essential disco goodies for October. Enjoy x

Richie Weeks’ work as a singer, songwriter, musician, and producer was foundational to New York’s disco, boogie funk, house scenes and beyond. From the late 1970s right through to the 1990s he racked up releases on a multitude of labels, while leading groups such as Weeks & Co, The Jammers, Major Weeks and Jiraffe. Now Past Due Records set about realigning his legacy with a triple album of previously unreleased music. These unknown gems salvaged from the eye of the disco storm between 1978-9, we have 12 tracks that instantly transport you back to the heyday of NYC. These are immaculately crafted songs, arranged with plenty of instrumental grooving – check the slinky bassline on ‘Find That Disco Rhythm’ or the blissful, elongated funk-stye intro on ‘Love Magician’ for further proof.

Berlin based Lovebirds, has been making music that unites the masses for over two decades now. Sebastian Döring, has a long and harmonic mixing style that draws out tensions and emotions between tracks, Lovebirds never fails to take you on a multi-dimensional trip. After a long break of extensive procrastination and studio gear acquisitions, Lovebirds returns with ‘Just Music & Me’. Made some fifteen years ago in his Hamburg studio at the height of his early production period, it was forgotten on the hard drive until recently. If you’re looking for an artist with a modern sound who can take you back in time, look no further than Lovebirds!

Destined to be a No 1 smash, Glitterbox’s very own Melvo Baptiste returns to the Glitterbox with his second single ‘Gonna Be Alright’. Featuring Chicago royalty Jamie 3:26 and Annette Bowen who you might recall from her recent Honey Dijon collabo, ‘Gonna Be Alright’ has already sparked the attention of some of house’s finest, including Louie Vega, DJ Spen, Natasha Diggs and Luke Solomon. Melvo’s musical education, based on the principles of soul, rare groove, funk and disco radiates on this release, as urgent keys, live percussion and a driving energy work together to form a rich backdrop to Annette’s evocative topline and Jamie’s playful Windy City spoken-word.

The duo hailing from North Wales, are inspired by Studio 54’s famous disco ball and the exciting eccentricity of the underground house scene. Now Brighton based, Displaying the duo’s impeccable production and crystal-clear engineering throughout, ‘Keeping Tabs’ is an early autumnal disco house bruiser, built around powerful female vocals, a futuristic bass-line & boogie synths. Hollie is quickly becoming a blistering ray of sunshine in the DJ world & has quickly bolstered her career across the world whilst studio wizard Endaf’s studio has been busy spinning records and twiddling knobs for over 10 years. His productions showcase his introvert and extravert sides ranging from his mellow, jazzy electronic jams & all the way to mighty house bangers made for the club. Essential!!

Kalita present the first ever official reissue of Sweet Clover’s highly sought-after 1979 disco single ‘You’re What I Need‘. Sourced from the original master tapes, original copies released in a run of just 300 copies and now hitting top three-figure sums on the rare occasion that they come up for sale, Kalita finally serve up a chance to obtain this lo-fi disco masterpiece once again. ‘You’re What I Need’ an outsider disco favourite, the production was handled by writer and producer Willie McClain, a criminally little-known talent behind a slew of acetates who also backe names like Ernest Rodgers and Arena Allen.

Next up on MFSP, is an EP of remixes from head honcho Pete Herbert, featuring some hot exclusives and under the radar dancefloor burners that have been tried and tested by Pete and some of the best in the business and are ready for action. From the long awaited bubbling arp and synth show piece Field OF Dreams ‘Pourquoi’ remix to the future funk discoid dubs of Low Cut Top and Accelerate, to the end of summer balearic chug of Orange Chika and The Gino Fontaine AKA Andy Meecham, plus an exclusive PH number with DJ support already from Eric Duncan, Horse Meat Disco, Ron Basejam & Bill Brewster.

The London based Ghanain brothers of Michael and Isaac Osapanin formed Kabbala in the 80’s. ‘Ashewo Ara’ is their cult classic from the afro disco scene and now has been given new life from Dave Lee’s Z Recorcs. Bringing the keys to focus with staccato Rhodes complimented by thick slappin’ disco bass and glistening afro percussion before a serious fender solo soars in and takes it home. Doug Gomez brings his ‘Merecumbe Soul’ touch to the track, opting for a stomping afro house rhythm & shiny Clav licks-a-plenty. Finishing off the package is the original, remastered in all its glory.

London’s super Funk / Soul brotha’, singer & guitarist, Del Blake is back with his 2nd single Imagenes Recordings. ‘Disco Cake’ is a modern disco boogie collaboration with ‘Funky Magnetic’ aka production duo Juan Laya & Jorge Montiel who have been using this moniker for several years. Rising star, French DJ & producer Tommy Glasses has also baked a super tasty remix to the delight of the Disco-House lovers, and as the final touch to the package, an alternative remix by Juan & Jorge themselves.

Tags: Midnight Riot, yam who
This website uses cookies to ensure you get the best user experience. By clicking “Accept All”, you consent to the use of ALL the cookies. However, you may visit "Cookie Settings" to provide a controlled consent.
Cookie SettingsAccept All
Manage consent