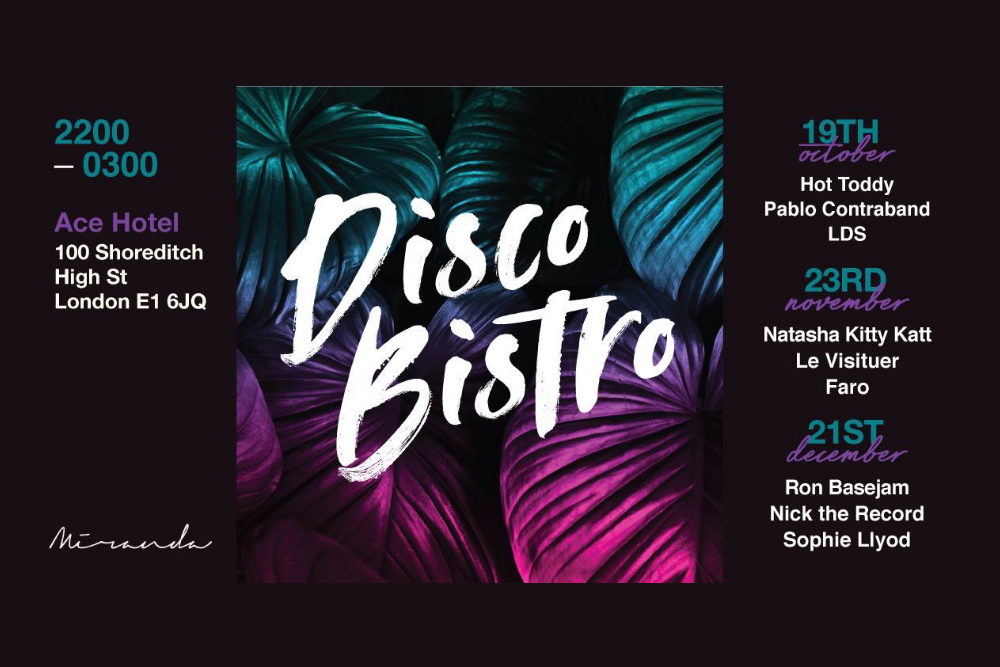 London Disco lovers make sure you check out this brilliant series of gigs in the extremely cool Miranda club under Ace Hotel in Shorditch. It’s an intimate space so make sure that you get your tickets in advance for the first event from HERE

Following on from that on the 23rd November they host LV blog fav Natasha Kitty Katt, Faro and our own editor and disco wizzard Le Visiteur. The final gig lands on the 21st December seeing Ron Basejam, Nick The Record and Sophie Lloyd take over the decks. More about those next 2 gigs upcoming.

Hot Toddy is one of the producers behind the brilliant Crazy P and a super hot artist in his own right releasing a steady stream of chart bothering tracks and some stellar remixes for the likes of Joey Negro, Soul Clap, Kraak & Smaak & Lovebirds.

Pablo Contraband is the DJ behind the well respected and very excellent Disco Deviant blog and parties. He’s a highly skilled DJ behind the decks, regularly touring the world and playing alongside the cream of the electronic and disco world.

London Disco Society founded in 2011 and they have 20 years+ of Djing experience between them. They have spent the last 7 years touring the UK and further afield spreading their disco gospel from sold out club nights to the UK’s biggest festivals.

For More info on all the artists check:

Tags: disco, Disco Bistro, Faro, Hot Toddy, LDS, le visiteur, Miranda, natasha kitty katt, Nick The Record, Pablo Contraband, Pop On Over, Ron Basejam, sophie lloyd
This website uses cookies to ensure you get the best user experience. By clicking “Accept All”, you consent to the use of ALL the cookies. However, you may visit "Cookie Settings" to provide a controlled consent.
Cookie SettingsAccept All
Manage consent