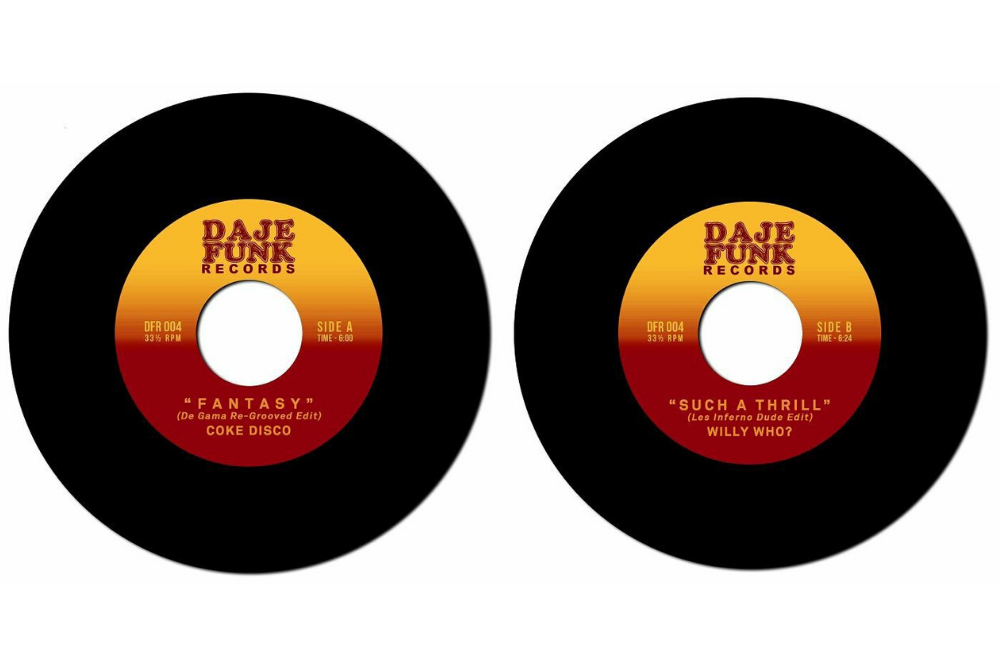 Daje Funk keep their run of golden form in 2019 going all the way to the end of the year with another high quality double header 7” in the shape of Daje 004.

Kicking things off is another sure fire dancefloor smash in the shape of brilliantly moniker-ed band Coke Disco’s ‘Fantasy’.

Coming in strong on the scalpel work is label co-boss ‘De Gama’ who has been on fire of late with string of stand-out edits and original tracks over on Samosa Records.

Smooth filtered bass, chunky drums and loopy percussion warm things up perfectly before it launches into the powerhouse female ‘disco lights’ vocal and the stand out ‘disco dance’ vocal loop. The vocal is about as 70’s as they come, brilliant feel-good vibes all round!

Another monster track from the all star tag team of Daje Funk records and De Gama.

On the flip side of the 7” the other half of Daje Funk ‘Les Inferno’ brings his undoubted powers to bear on a brilliant edit of Willy Who’s ‘Such a Thrill’.

Smooth pianos, effervescent bass and some brilliant work on the drums propel this one forward laying the groundwork perfectly for a ridiculously sexy female vocal.

Add in smooth strings, brass stabs, funk guitar licks and a classy guitar solo and this one is another high point of 70’s soul influenced vocal disco.

Its lazy groove scoops you up and leads you to the dancefloor whilst never for a second losing your gaze.

A brilliant release yet again for Daje Funk which will fly off the shelves quicker that you can say peak-time.

Tags: Coke Disco, Daje Funk, De Gama, Les Inferno, Samosa Records
This website uses cookies to ensure you get the best user experience. By clicking “Accept All”, you consent to the use of ALL the cookies. However, you may visit "Cookie Settings" to provide a controlled consent.
Cookie SettingsAccept All
Manage consent