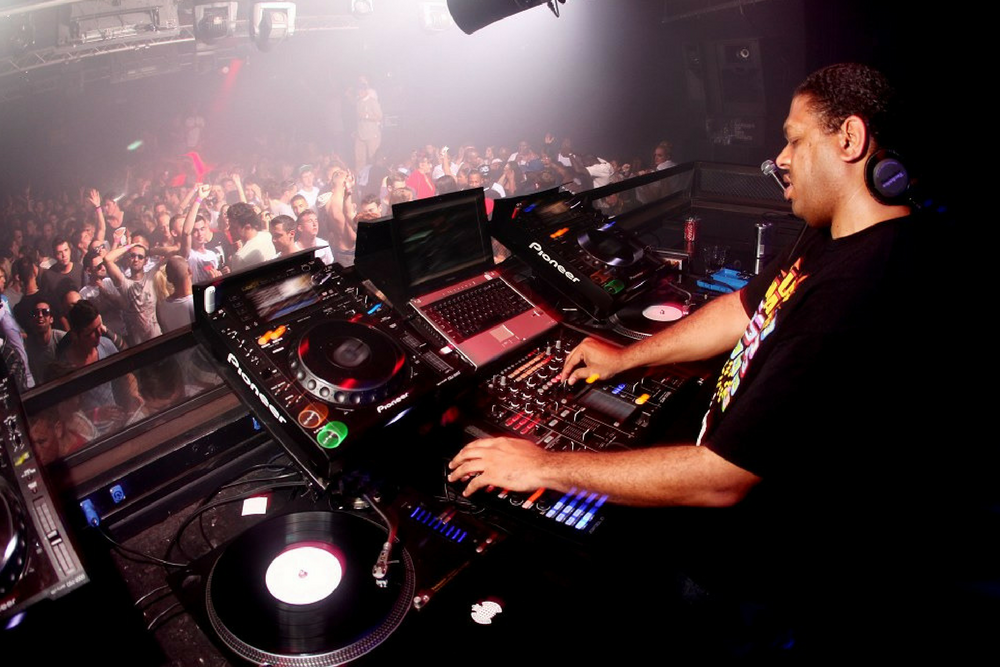 Kerri Chandler is a DJ that I have seen many times since I started DJing and clubbing. His sets are always impeccable from his track selection to this technical ability, he is easily one of the most talented and accomplished performers on the circuit. Here I run down 10 of my favourite productions from Kerri from vocal bliss to straight up no nonsense club shakin peak-time anthems. Most of these are classic Kerri Chandler tracks which have stood the test of time but I could just have easily have picked 10 tracks from the last couple of years which will go onto be classics, his current output is still absolutely top class.

Born in 1969 Kerri Chandler has been active as a producer since the early 1990’s and over the last 25+ years he has released more than 130 12″, 3 albums, multiple mix CD’s and a ridiculous amount of tracks digitally. Indeed if you go onto Traxsource and search his name it lists 937 tracks with releases on some of the biggest labels around including King Street, Nervous, Ibadan, NRK and Downtown 161. As well as being a prolific producer Kerri also runs Madhouse and Madtech Records and Kaoz Records with releases from some of the biggest players on the scene.

Born into a musical family, Kerri’s father was also a DJ father who gave him a firm background in soul and disco. Kerri was an early starter with his first DJ gigs at the age of 13 and a production career starting the following year.

First up are 2 tracks from the 90’s. Kerri Chandler Presents Arnold Jarvis – Inspiration is one of those vocal tracks which just sets an incredible scene in the club, the production is a delight. Theres a lot going on here from the heavy beats and bassline to the multiple piano lines and of course the superb vocal delivery from another legend of the scene Arnold Jarvis. Its packed with drama but never overpowering. Kerri Chandler – Atmosphere is a really brilliant track and one which helped put Kerri’s name on the map as a producer. Again the beats and bassline are huge and in your face but perfectly balanced with the lead synth and looped string line. This is a track which sounds as fresh today in the club as it did the day it was released.

Next up are a couple of huge percussive house tracks from the 00’s Kerri Chandler – Kong is deep and tracky, built around a big drum pattern and deep as you like looped up synths it’s a real trance inducing track which pulls the dancefloor in and sets it off. Kerri Chandler – Bar A Thym is for me the quintessential Kerri Chandler track and as always the drums are huge, the cowbell is right in your face and the ever increasing synth line is pretty much perfect. If you want a dancefloor in the palm of your hand this track is one to drop.

Back to the 90’s for our next two Kerri Chandler – Rain is another top drawer vocal track, the vocal is great but for me it’s the keys and the percussive break which are the stars on this track. The key melody is really quite unique, likewise the percussive break is also fantastic, this is a great example of how you can create a house track which really stands out from the crowd. Bassmental – Here & Now is one of Kerri’s aliases and is a much more club orientated track featuring big synth stabs, a great lead vocal, heavy reverbed backing vocals and ever so punchy drums which demand that you move your feet.

Another two 00’s tracks now. Kerri Chandler – Downtown (Dark Mix) is another deep and moody club track which matches synth stabs off against atmospheric sweeps and a deep as you like male vocal. New elements are added all the way through so that it keeps the interest and the pace moving on nicely. Kerri Chandler – Six Pianos has some serious ‘Strings of Life’ vibes about it with a big in your face lead synth line backed up by powerful drums this is a best dropped at 4am track and one which will lift your dancefloor up several notches.

Finally we have 2 tracks also almost bookmarking Kerri Chandler’s career one from the 90’s and one from 2010 Kerri Chandler – The Old Office has a big funky bass loop, heavy percussion and super subtle keys all coming together to create a track which would work just as easily in the warm up as it would in the after hours club. Lastly Kerri Chandler – Mommy What’s a Record has one of the best spoken intros ever before launching into a deep and moody house track, again perfect for the afterhours sessions.

You can check more about Kerri Chandler below

Tags: arnold jarvis, ibadan, kerri chandler, king street, nervous
This website uses cookies to ensure you get the best user experience. By clicking “Accept All”, you consent to the use of ALL the cookies. However, you may visit "Cookie Settings" to provide a controlled consent.
Cookie SettingsAccept All
Manage consent