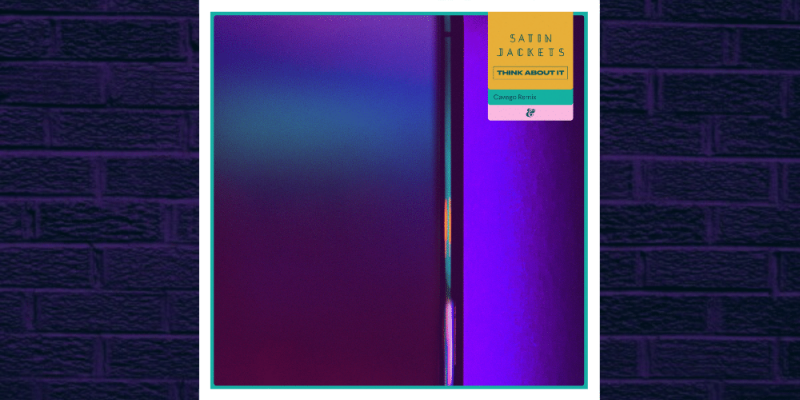 At the very end of last year we covered the Jack Tennis Dub of Satin Jackets stunning track Think About It which popped up as part of Too Slow To Disco’s brilliant The Sunset Manifesto album (check all about that one HERE). It was a blissful track to close the year out with, fitting in a year in which Satin Jackets had delivered one Nu disco anthem after another.

Now Satin Jackets and Eskimo Recordings are giving the track a full summer re-release and have drafted in one of the most exciting talents on the Nu Disco scene Cavego to give it the remix treatment and oh boy has he delivered.

Think About It was recorded early last year at the renowned Hansa Studios in Berlin, the same studio where Bowie wrote his now legendary trio of Berlin albums. It’s a studio dripping in history and Satin Jackets has delivered his own slice of Nu Disco history here.

Norwegian star in the making Cavego has delivered a straight 10/10 remix, it’s a track flowing with a dreamy yet energetic Nu disco funk. The bassline is the engine and it’s a perfectly realised and impossible not to dance to bass riff which would likely see Bernard Edwards smiling from ear to ear. Indeed the Chic comparisons are perfect here, the slick guitar licks, dreamy keys and delightful yet powerful drums. As was always the case with Chic’s greatest moments the whole track and arrangement is full of space leaving plentiful room for the wonderful vocal to take centre stage with its pleading and yearnful delivery.

This track is as close to Nu Disco perfection as you are likely to hear this year and another stunning entry into the satin Jackets discography.

Grab the track from: https://link.eskimorecordings.be/ThinkAboutItCavegoRemix